Skip to content
Posted on October 8, 2015 by Panda Eats London

Bangkok boasts to be the first Thai restaurant in London having opened its doors in 1967! However, this is the first time I’ve been but it feels like nothing would have changed since they opened back in the 60s. The menu looks more Pan-Asian, with a Thai focus, than simply Thai. Though the decor is dated and menu lacking authenticity there is a charm to it which keeps its clientele. Many of the customers seemed to be long friends of the owner. 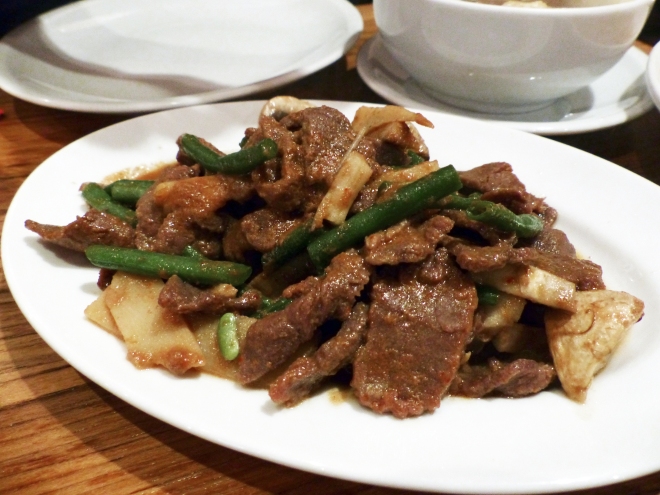 I personally have low expectation of Thai food in London compared to in Asia. The food on offer seems to differ substantially between the two continents and regularly the European counterpart is overly sweet, so it was refreshing for Bangkok to actually ask the level of spice you wanted.

Whilst the menu felt a little thin they have a substantial wine list on offer that will surely please the post-museum/south Kensington crowd. But since I’m not a wine drinker lets go to the food. The waitress served us Thai Green Chicken Curry but mistook it for a soup which I wouldn’t fault her for as the curry looked very watery. I prefer my Thai curries to be a lot creamier based on the quantity of coconut milk added so that it melds well with the rice however saying that the curry (which I ordered to be medium) was pleasantly fragrant with a good amount of spice, though I would have liked more! The chicken was also very tender and plentiful despite the bowl looking rather small. The other main dish we had was the Beef Panang which was much less successful. Whilst I do not fault them for delivering us a sweet dish since we ordered mild the plate of food was devoid of spice and interest. The oddest inclusion on the menu, which we also ordered, was the Thai Rice-Noodle, expecting it to be Pad Thai. What came was more like a Singaporean Fried Rice Noodle without all the accompaniments. However it did taste ok, with an unknown Thai flavour, but I personally felt £6.50 was far too much for this.

Service was pleasant throughout the night. We were given the wrong bill at the end of the meal but this was handled courteously.

Overall, I feel that nowadays the discerning London customer will know their Pad Thai from their Som Tam so I’d encourage Bangkok to be more authentic with their dishes rather than solely catering for their existing clientele. Price wise Bangkok is mid-range but maybe for South Kensington it’s on the lower side but I feel with the size of their dishes they are slightly on the pricier range.