Sometimes I go out of my way for food, this was one of those cases! Craving a good Malaysian we traveled out from Bank to satisfy those cravings. Malaysian food in London has yet to have its big stage yet so places are either clustered around Bayswater or dotted around London.

First impressions, love the traditional menu with a lot of Malaysian favourites, I couldn’t wait to try them all! One of which is actually Teh Tarik. If you know me I’ll order Teh Tarik everytime its on the menu! I’m addicted to the stuff! Satay House’s version was sweet but also great to taste a bit of bitterness as well to temper the taste. 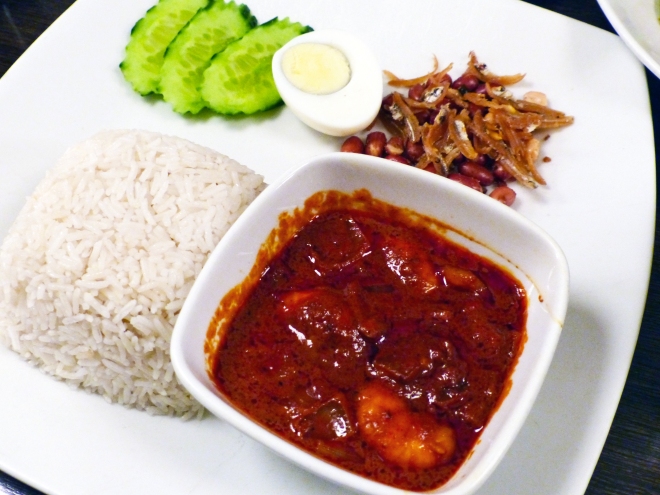 Nasi Lemak, the national dish of Malaysia! Whilst I was incredibly happy to see the ikan bilis on the plate, as I’ve noted a few Malaysian places in the UK omit that, I felt the presentation was lacking and uninspiring. For me Nasi Lemak has always been a visual treat for the celebration of flavours and textures that can be seen but Satay House’s was languid. However the fiery sambal mixed incredibly well with the dish, though I’m more accustomed to chicken being on the plate

Kway Teow Goreng on the other hand was presented beautifully, with what looked like a plate full of ingredients, and yes hidden beneath the flat rice noodle confines were an abundance of squid, vegetables and prawns but I feel the taste was somewhat lacking with a slightly strong lashing of soya sauce.

Being the eponymous name of the restaurant I thought Satay would be something of a specialty. We ordered a mix of chicken and lamb. Whilst the meat was well cooked and the satay sauce had a nice nutty texture, on the whole it was lacking the “bite” I was expecting. I am a huge fan of satay sauce, I could drink it! But Satay House’s satay weren’t as moreish as I’d hoped. Though saying that Satay House’s satay is much better than a lot of others I have been served in the UK, maybe my expectations were just too high.

Our Ais Kacang was a nice sweet treat to end the evening, though rather large even for two. Whilst visually appetising I would suggest placing it in a bowl as we found it rather difficult to mine for the gems beneath.

Service was efficient though rather cold in my opinion and whilst I totally understand that they need to move tables quickly rushing diners is always bad practice in my book. The decor was comfortable and clean though nothing to write home about. It’s definitely one of the more “clean” and modern interiors I’ve been to for Malaysian food.

Overall, a strong contender for best Malaysian in London to satisfy those food cravings!